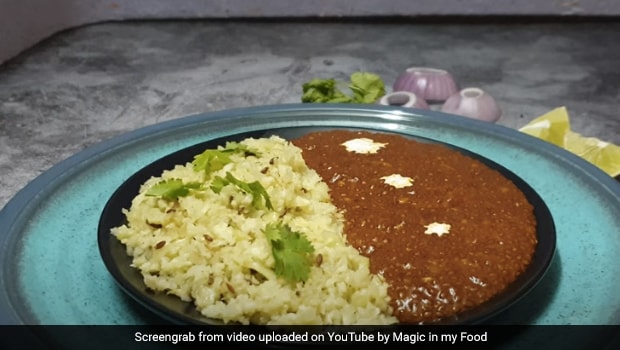 Dieting and losing extra kilos is not a bed of roses. One of the biggest struggles we face during this phase is controlling our cravings for all those yummy and decadent foods. But giving up on your healthy eating habit or surrendering to the cravings is never an option! Instead, one must look for ways to sneak in your favourite foods to the existing diet regime in the healthiest way possible. All you need to do is to replace the calorific or fattening ingredients in a recipe with their healthier alternatives. A simple tweak in the recipe can help you strike balance between health and taste in your everyday meal.

We found one such recipe that can help you relish the ever-comforting rajma-chawal while undergoing a keto diet regime. For the unversed, keto diet is one popular weight loss diet where people reduce carb intake and substitute it with healthy fats to make up for the lost energy. And here, both rice and rajma are loaded with carbohydrate; hence, dieticians advise to exclude both these ingredients during keto diet.

Shared by vlogger Jyoti Dalmia on her YouTube channel ‘Magic in my Food’, this keto-friendly rajma-chawal recipe replaces kidney beans with aliv seeds and white rice with cauliflower rice. Also referred to as garden cress seeds, these miniscule seeds are enriched with protein, iron and vitamins A, C and E. Alongside its rich nutrient profile, aliv seeds have a light bitter flavour that resembles the taste and texture of rajma beans.

How To Make Keto-Friendly Rajma:

Step 2. Transfer the soaked seeds in a pressure cooker and add water, ginger-garlic paste, salt, hing, tomato puree and ghee to it.

Step 3. Cover the lid and pressure-cook up to 6-7 whistles.

Step 4. Open the lid after the pressure is released and boil till the gravy thickens up.

Alongside the unique rajma recipe, Jyoti Dalmia also shared the recipe for jeera cauliflower rice to make for a wholesome meal. Let’s take a look!

Listen to the latest songs, only on JioSaavn.com