UAE weight-loss: ‘How I lost 22kg in four months’ 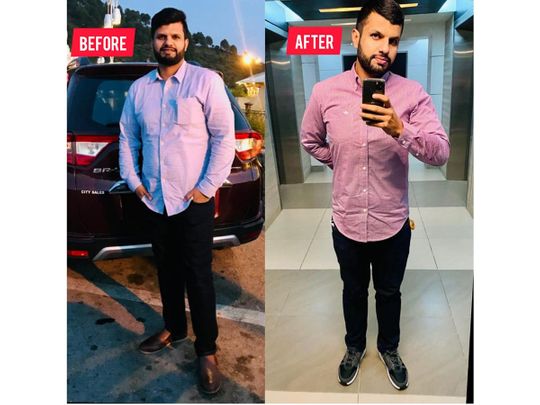 Pakistani expat Ismail Mubarak before and after. Image Credit: Supplied

This tale begins as things usually do – with a bit of unsolicited advice. They said: “There’s no full stop, you keep increasing [in size]. You should rethink your diet,” recalls Pakistani expat Ismail Mubarak.

It’s not that Mubarak wasn’t interested in losing weight; he was 31-and-a-half-years-old and while he’d always been a bit big, he wasn’t used to the lethargy and negativity bred by his growing girth. By the time COVID-19 curbed movement that meant stay-at-home orders were in place, the five-foot-nine-inch expat was already wearing a size 38 waist and weighed 101kg on the scale.

The niggling remarks had been getting to him when he had an epiphany: “I decided I have to do it [get fit] and it’s only me who can do it. People can talk to you but they can’t walk for you – you have to do it yourself.”

The rain of advice on how to go about it kept pouring down on him as he started on his fitness journey. Someone told him to cut down on carbs; he did. Someone else told him to skip rope; he did that too. Initially, he says, he could manage only one or two jumps – today he can skip 200 times at a time. (Today, he also walks 8km before bedtime.)

“I decided to have [much more] protein and no pastry items, no cold drinks and usually no late night dinners, no burgers. Even on [my] cheat days [which would come later], [I would] eat, but very less quantities. And rice, NO!”

Pre-breakfast: Warm water with cumin, cloves of garlic and lemon
Breakfast: Oats with yoghurt or low fat milk. No sugar. Plus cup of tea with 1/2 tsp brown sugar
Lunch: One roti (flatbread) with vegetable/chicken/mutton
Dinner: Chicken breast with onions and tomatoes
Snacks: One apple, one orange
Before sleeping: One cup of warm water

For a time, Mubarak cut wheat out of his meal plan too. “I found I became so weak that I [could not] walk. [I] just need[ed] to sleep and sleep, so I started [eating] one roti [flatbread] at lunchtime with any food cooked at home. The food should be cooked in olive oil. It can be anything – dal or vegetable – [with] less spicy and homemade ingredients,” he recalls, of his initial diet days. 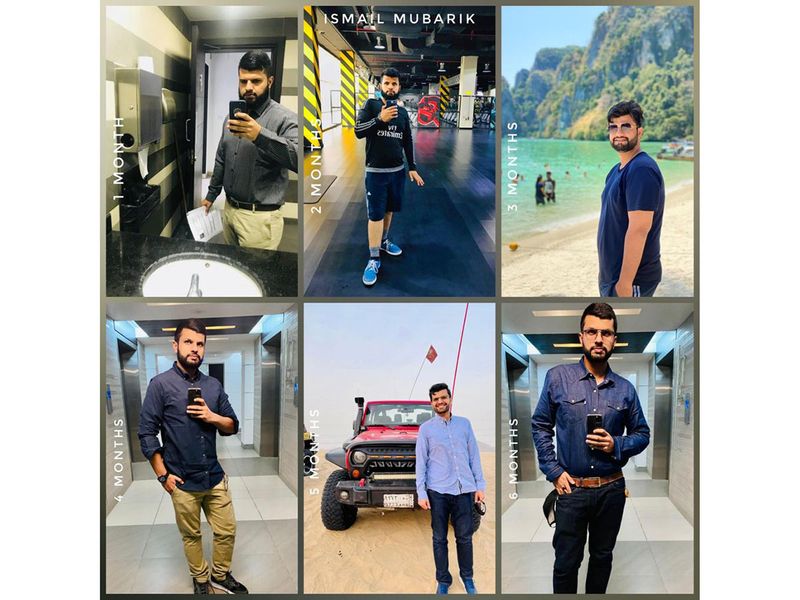 “In the beginning it was tough – how can I stop everything? But after two-three weeks I started changing myself I realised that’s the point. Stop eating extra meals, stay on your target, eat less, eat healthy,” he says.

But his journey did make him a bit lonely; dietary restrictions coupled with wanting to stick to his path meant staying away from gatherings. “People started getting angry with me. I decided once in a week I can eat anything but I made sure it should not be very bad – no burgers and pizza. I would eat a burger without buns [or with brown bread for example]. And salad.”

Still there were the naysayers – and Mubarak is quick to warn against listening to them. “In the beginning when I [lost some] weight, people were saying, ‘are you COVID infected? Why have you lost weight?’ They were discouraging me, telling me, ‘why are you losing weight, you look like you are sick’.” He stuck to his course. “I said, ‘I am eating well, taking care of myself’.”

Mubarak urges people wanting to try weight loss to believe in themselves and never say never. It may sound cliché, but they are sayings for a reason, he believes.

After a 22kg weight drop in four months, the expat has many reasons to smile. “[The] best part [of losing weight is] I’m very active now, very confident, positive, full of energy. I don’t lose hope now.”

When he began his story of fitness, Mubarak lived alone, making his journey solitary but doable – now, since his family has joined him, it’s become a little more complicated. “I stick with my diet,” he says, but it can be tough – there are so many homemade delicacies to try. He also advocates diet changes based on intolerances or time periods – “if you keep eating the same four-five things, your body will adapt and you won’t lose weight,” he says.

Pre-breakfast: Warm water with cumin, cloves of garlic and lemon
Breakfast: Boiled eggs. Plus cup of tea with 1/2 tsp brown sugar
Lunch: One roti (flatbread) with vegetable/chicken/mutton
Dinner: Warm milk with turmeric and sometimes a date.
Snacks: One apple, one orange
Before sleeping: One cup of warm water

This tale ends as it usually does – with the villains having to swallow their words. In this case, people who judged and said mean things to Mubarak are coming back to him with questions, requesting advice this time. They ask: ‘how do we change our diets?’

Mubarak begins with a smile…