The Science Behind Adele’s Weight Loss

It’s common knowledge that health and longevity go hand in hand with diet, which has encouraged many people to pay close attention to what they eat. Although restricting calorie intake and fasting are proven methods to promote weight loss and longevity, it’s not an easy or exciting thing to do every day. But wouldn’t it be nice to just eat our way to a healthier and longer life? Well, maybe you can.

Just ask Adele, who was caught with her slimmer and fitter new look at Drake’s birthday during the fall of 2019, which she then officially debuted when hosting Saturday Night Live this fall. The award-winning singer-songwriter reportedly lost nearly 50 pounds after hiring a personal trainer and following a meal plan called The Sirtfood Diet.

But she’s not the only one. Several celebrities and athletes have touted the Sirtfood Diet, including English socialite Pippa Middleton in preparation for her wedding day as well as notorious UFC fighter Conor McGregor who attributed the meal plan to his comeback into the octagon—the UFC’s version of the boxing ring.

That’s why the Sirtfood Diet has become an international sensation. So, what’s the science behind the diet that helped Middleton get ready for her big day, fueled McGregor to a UFC World Championship, and is the secret to Adele’s tip-top shape revealed on Saturday Night Live?

Sirtfood is a term coined for a group of plant foods that when eaten in the right quantities activate sirtuins. This family of molecules is commonly referred to as our skinny or anti-aging genes. That’s because sirtuins are at the heart of how cells process energy to affect aging and our longevity.

Sirtuins mediate metabolism depending on the amount and type of nutrients available. When they are triggered, which can be elicited by caloric restriction and fasting in addition to ‘sirtfoods’, the body goes into a kind of ‘survival mode’. This stimulates fat-burning processes and switches on pathways to repair and rejuvenate cells. By doing so, sirtuins keep our cells fresh and functional to help the body stay lean and young.

You can find sirtuins throughout the human body. They work in tissues and organs involved in the processing of fat, including the liver, pancreas, skeletal muscle, and adipose tissues, which is where fat lives.

Sirtuins control when fat is made, stored, and used by cells both directly and indirectly. They directly control the generation of fat cells in adipose tissues and can promote turning fat into energy and protect from excess fat accumulation in skeletal muscle and the liver. They are also indirectly involved in the regulation of fat by affecting the secretion and action of insulin by the pancreas.

The brain is another home for sirtuins. As their levels ebb and flow, sirtuins affect how the brain instructs certain tissues and organs to consume energy. Sirtuins also play a role in controlling our appetite. For example, caloric restriction alters our behavior to suppress wanting to consume more food.

Since sirtuins play a role in the regulation of fat and appetite control, they are promising targets for dieting as well as obesity and associated disorders. But that’s not all. Sirtuins play a central role in our longevity through their control of cell growth, replication, aging, and death.

They protect and repair our genetic blueprints (DNA) and cells in response to damage from dangerous molecules called reactive oxygen species. In fact, the degenerative events that underlie several human chronic disorders, including heart disease, obesity, and diabetes, can be caused by the sirtuins not guarding cells against oxidative stress.

As we get older, sirtuin activities decline. This is likely because sirtuins can only function in the presence of a vital molecule nicotinamide adenine dinucleotide (NAD+) whose levels decrease in availability with age. With the loss of sirtuin activity goes our ability to keep cells healthy and young, contributing to our body’s deterioration, decline, and disease susceptibility. In this way, the intimate interplay between NAD+ and sirtuin decline over age eventually limits our lifespan.

The Sirtfood Diet is based on how specific plant chemicals called polyphenols activate sirtuins. Polyphenols are found in many plants and foods, such as fruits, vegetables, tea, cereals, and wine. Numerous studies have provided evidence of the effects of natural polyphenolic substances, such as resveratrol, quercetin, curcumin, genistein, and epigallocatechin gallate (EGCG) on sirtuins. Long-term intake of polyphenols is associated with health benefits. 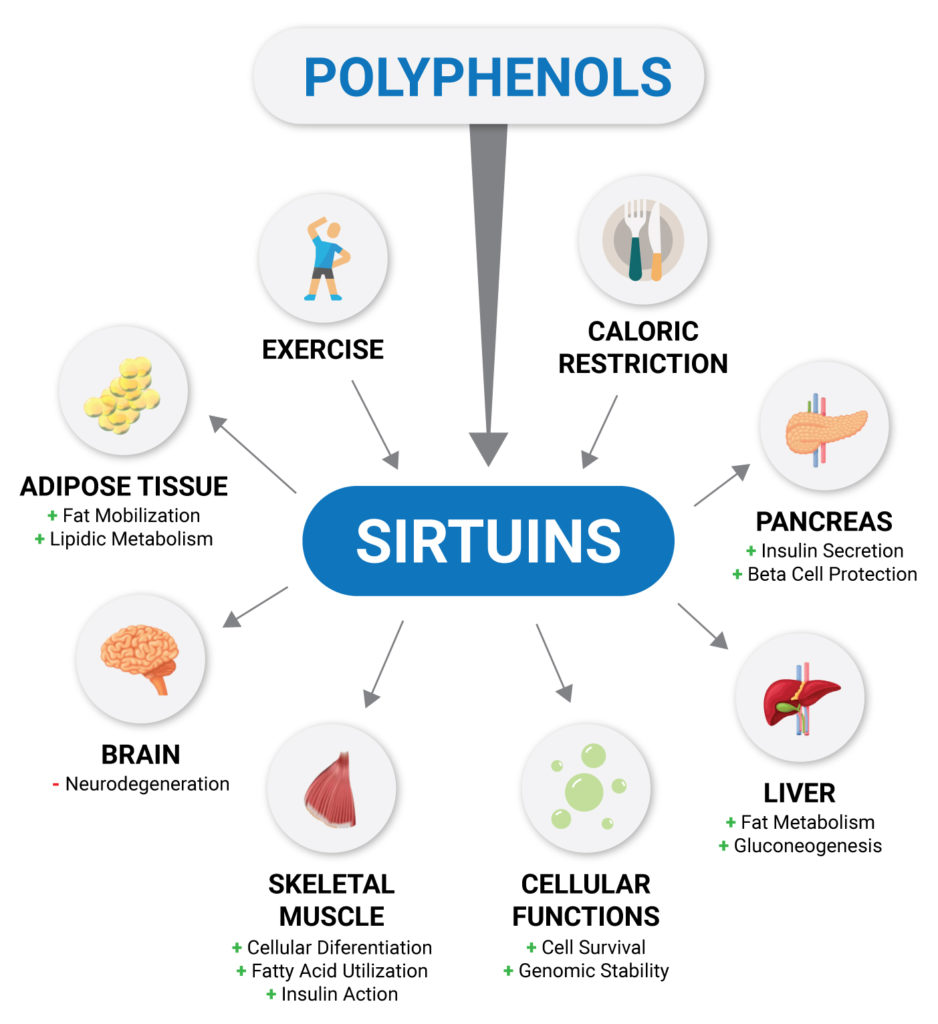 Polyphenol activation of sirtuins has been shown to have many positive effects on metabolism including fat-burning. Naturally occurring dietary polyphenols also have antioxidant and anti-inflammatory properties by stimulating sirtuins directly or indirectly. Long-term intake of polyphenols is associated with health benefits.

Several reports highlighted that consuming polyphenols may protect against neurodegenerative, cardiovascular, inflammatory, metabolic diseases, and cancer by enhancing sirtuin activity. The fact that many of these natural molecules are introduced through food underscores the importance of dietary intervention to affect predisposition to diseases.

Overall, only recently have researchers explored the effects of polyphenols on healthspan and lifespan by targeting sirtuins. A better understanding of the effects of these plant made molecules on human health may lead to further and more focused development of their clinical use. Yet, there is evidence that regulation of sirtuin activity by dietary polyphenols is a promising dietary strategy to lose weight, promote longevity, and prevent many chronic diseases.