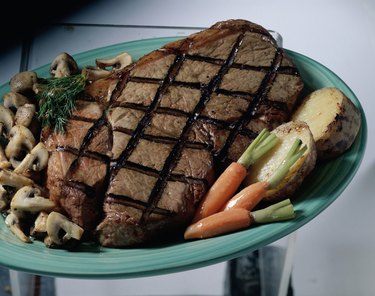 Steak and vegetables on a plate

Ketosis happens when your body resorts to fat for energy after your stored carbohydrates have been burned out. It often occurs when people fast and exercise. But most commonly, ketosis occurs in people who eat low-carb, high-protein diets, which are also called ketogenic diets.

There’s some evidence that ketosis can tax your kidneys, leading to kidney stones and low blood pressure. In diabetics, a variant of ketosis can be fatal. However, a small but growing group of health professionals say ketosis is not the poison you’ve been lead to think it was, and it may be better for you than high-carbohydrate eating. Your specific dietary habits are best advised by your healthcare provider or nutritionist.

Ketosis happens when you get a buildup of a substance known as ketones, or ketone bodies in your blood. They are released when your body’s carbohydrate stores run out and you have to break down fat stores for energy. Dieters tend to deliberately cause ketosis because it makes you feel less hungry. However, ketosis also makes you feel tired and sluggish, because as “Medical News Today” reports, ketones aren’t the most efficient source of energy, especially for your brain. Ketosis can also harm your kidneys.

Annually, more than 100,000 people are diagnosed with kidney failure in the United States, reports the National Institute of Diabetes and Digestive and Kidney Diseases, or NIDDK. The condition is marked by the inability of your kidneys to do their job of eliminating wastes. One treatment for kidney failure is dialysis, a draining and lengthy artificial blood cleansing process. Another option is a kidney transplant. The NIDDK states that the cost of care for patients with kidney failure reached close to $32 billion in 2005. The federal government subsidizes some kidney-related healthcare.

Ketosis Effects on the Kidneys

Very high levels of ketones make your blood more acidic and overburden your kidneys. “Medical News Today” reports that one of the side effects of a ketogenic diet is the formation of kidney stones. In processing higher amounts of protein, your kidneys work hard and are forced to excrete more sodium, calcium and potassium, as well as filter more of the byproducts of protein metabolism. This extra fluid and electrolyte loss can cause low blood pressure, another function mediated by your kidneys. Ketosis in the presence of diabetes can lead to ketoacidosis and coma, and can be life threatening.

A National Institutes of Health researcher, Richard Veech, argues that what’s being reported about ketosis is all wrong. He told the “New York Times” in 2002 that ketosis is a normal metabolic state, and arguably the “natural state of man.” He and others say that the media and some medical authorities have confused the public about ketosis, partially out of the real threat it poses to diabetics. But for the rest of us, says Veech, ketosis is simply an evolution-driven response to the need to survive on stored fat. Veech goes a step further saying ketones are a more preferred fuel source than carbohydrates. The Times reported in that article that previous research showed that the heart and brain run 25 percent more efficiently on ketones than blood sugar. In 2004, a group of Kuwait University researchers reported in the journal “Experimental & Clinical Cardiology” that they found no adverse effects of using a ketogenic diet in a sample of people with obesity over six months (Ref 6). If you want to start a high-protein or otherwise ketogenic eating regimen, it’s best to consult your healthcare provider before doing so, and seek regular care to ensure adequate nutrition.