9 Ways to Use Apple Cider Vinegar for Weight Loss

If You’re Stumped on How to Eat Healthy, This 7-Day Diet Plan Can Help

Is the keto diet the key to weight loss or a dangerous fad?

The ketogenic diet, or keto diet as it is commonly known, is a high fat, low carb diet that is popular among those people looking for quick, dramatic weight-loss. There are a number of different versions available all claiming to provide the secret to your weight-loss woes, but essentially the diet drastically limits your carbohydrate consumption, replacing it with high fat, so your body is forced to use fat from your food (or your flabby bits) as energy instead. But is the keto diet effective, and more importantly is it safe?

We speak to Dr Alan Barclay, Accredited Practising Dietitian and Research Associate at The University of Sydney, about the pros and cons of the dietary fad:

What is the keto diet?

The keto diet is a super low-carbohydrate, high-fat diet, similar in nature to the Atkins Diet.

‘The aim of this diet is to significantly decrease the amount of carbohydrate in your diet, so that the body switches from primarily burning carbohydrates, to burning fat, for energy,’ says Dr Barclay.

Thanks to the absence of sufficient carbohydrates and an excess of dietary fat, your liver generates greater quantities of what is known as ‘ketone bodies’, and this effectively puts your body into a metabolic state known as ‘ketosis’.

In ketosis, your body becomes incredibly efficient at using ketone bodies, generated from the breakdown of fat, as fuel. In other words: your body will burn more fat.

On a ketogenic diet, you are encouraged to consume more high-fat foods, such as fatty meats, full-cream dairy, butter, nuts, avocado, olive oil and coconut oil.

In ketosis, your body becomes efficient at using ketone bodies. In other words, you burn more fat.

A standard ketogenic diet consists of a split of around 30 per cent protein, 60 per cent fats and 10 per cent carbohydrates. Experts advise that you should eat no more than 50g of net carbs a day for the body to stay in a ketogenic state. 50g of carbs is equivalent to one cup of oats, one medium sweet potato, one cup cooked brown rice or one slice rye bread – in other words, not much.

What can’t you eat on a keto diet?

What foods are excluded in the keto diet? Generally, the ketogenic diet reduces or excludes some pretty major food groups, including carbohydrate-containing foods:

Is the keto diet safe?

Following the keto diet can be safe in the short term, but it does come with health concerns.

‘It’s not something that I recommend for the general population for the long-term,’ advises Dr Barclay. ‘By drastically cutting out carbohydrate-containing foods, you’ll miss out on the nutritional benefits of healthy choices like whole grains, fruit, starchy vegetables, and legumes such as beans, chickpeas and lentils.’

The ketogenic diet is a short-term solution to a long-term health problem.

‘Cutting out carbs without advice can be dangerous, and can put you at risk of deficiencies in the long-term,’ warns Dr Barclay. ‘If you’re looking to lose weight, burning fat may sound like the key to success, but in actual fact it comes with some risks, and may not be effective in the long term. The ketogenic diet is a short-term solution to a long-term health problem.’ 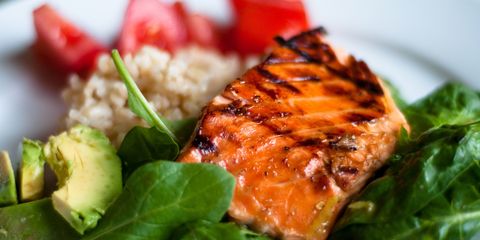 What is the keto flu?

The transition to a ketogenic diet can also come with its fair share of worrying side-effects, often referred to as ‘keto flu’. These side effects can include:

How long does the keto flu last?

Most people will only experience keto flu symptoms during the first week or two weeks of switching to a keto diet, especially in the first three to five days.

Keto flu symptoms can occur when the body enters a state of ketosis and starts burning fat (rather than carbs) for energy, resulting in a temporary imbalance in energy sources, insulin, and minerals in the body.

For most people, keto flu symptoms will pass and your energy levels will return to normal after the first week or two of being on a keto diet.

If you are unsure whether your symptoms are normal or feel very ill, you should contact your doctor.

Does the keto diet work?

Keto diet fans say the eating plan can produce quick weight loss, while providing individuals with more energy, but the evidence for this is mixed.

‘Studies have shown that compared to energy-restricted diets (ie cutting down on overall calories in a day), low-carb diets may be more effective for weight loss in the short term,’ says Dr Barclay.

People find it difficult to maintain a low-carb diet, which suggests it’s not sustainable long-term.

‘This is partly due to decreases in body glycogen stores in the liver and muscles, and the associated water loss that occurs – which collectively weighs about 2kg in a typical adult.’

But when you look at long-term results, there is very little difference between the two. ‘Part of this is because adherence is very poor for low-carb diets in the long term – that is, people find it difficult to maintain a very low-carb diet, which suggests it’s probably not sustainable to continue eating this way in the long-term,’ says Dr Barclay.

️ Because we do not know the long-term health effects of very low-carb diets, thanks to a potentially very low-fibre and high-fat content, cutting out these major food groups could put you at risk of bowel cancer.

Evidence suggests that low-carb, high-fat diets can be effective for short-term weight loss, but little is known about their long-term safety and efficacy. For this reason, the ketogenic diet should only be followed under clinical supervision, advises Dr Barclay.

Despite the hype that tends to surround these diets, the belief that everyone will benefit from one dietary approach ignores the important differences between each of us as individuals. When it comes to diet, there is no one-size-fits-all approach! So if you are serious about changing your diet, proceed with caution and speak to a medical professional before excluding any food groups from the menu.

Dr Roger Henderson is a Senior GP, national medical columnist and UK medical director for LIVA Healthcare He appears regularly on television and radio and has written multiple books.