Health Benefits of a Mediterranean Diet

The word Mediterranean refers to the origins of the diet, rather than to specific foods such as Greek or Italian foods.

Using a wide range of fruits and vegetables gives the body maximum access to sources of vitamins, minerals and other trace nutrients. There are individual foods within the Mediterranean Diet which are particularly beneficial to health, such as olive oil, garlic and some fruits and vegetables. However, overall it is the combination of foods within a healthy lifestyle which is linked to improved health.

The overuse of salt in flavouring Western-style meals and fast foods has been linked with increased blood pressure. The healthy alternative is to replace the excess salt with herbs and also garlic, as Mediterranean people have done for many years. This can also add new flavours to quite simple pasta dishes, rice dishes and stews.

The Mediterranean Diet is rich in vegetables, fruit, peas and beans (legumes) and grains. It also contains moderate amounts of chicken and fish. There is little red meat and most fat is unsaturated and comes from olive oil and nuts. Having a small amount of red wine has been shown to increase the health benefits.

In combination with moderate exercise and not smoking, the Mediterranean Diet offers a scientifically researched, affordable, balanced and health-promoting lifestyle choice.

The typical Western diet is high in animal fats, sugar and preservatives but low in fruit and vegetables. Scientific research has shown that this food combination is partially responsible for triggering many chronic diseases and cancers.

Research has also shown that following a Mediterranean diet can reduce the chance of developing conditions such as heart disease, type 2 diabetes, high blood pressure, obesity, some cancers, Parkinson’s disease and Alzheimer’s disease.

It can also be useful for people wishing to lose weight as it is rich in fruit and vegetables and lower in sugars and saturated fats than a typical Western diet.

Switching from a Western to a Mediterranean diet represents a healthy lifestyle choice. It can reduce the risk of a premature death and increase the chance of a healthy retirement, free from long-term medication.

Note: some oily fish contain low levels of toxic heavy metals. Pregnant women and those trying for a baby should limit their intake of tuna, shark and swordfish.

Scientific research has shown that the closer we can get to the ideal Mediterranean diet, outlined in the pyramid chart below, the greater the health advantage. The benefits of adopting the whole dietary pattern are greater than the health-giving properties of each type of food. 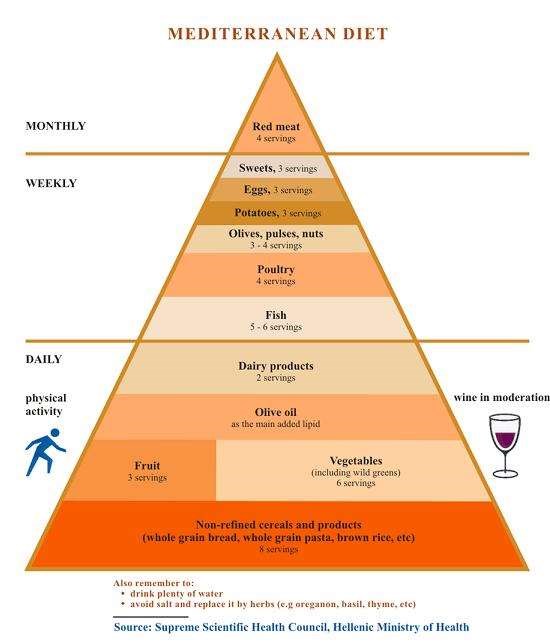 A guide to portions or servings described in the pyramid is as follows:

The strict Mediterranean Diet has been assessed and found to contain all the essential nutrients required for normal health. It also avoids excessive consumption of ingredients linked to ill health. Try it for yourself.