Column: Surprise! The Internet has thoughts about Adele’s new body

Are you a Donna Reed or an Adele?

Is your image demure or devil-may-care? Are you an icon of domesticity or cultural-ideal busting?

Turns out it doesn’t matter because whatever pedestal of womanhood you’ve been hoisted upon, the pedestal exists to facilitate target practice.

Here are two talented women who, though separated by medium, several generations, the Atlantic Ocean and, well, death, somehow managed to briefly ignite the pop culture news cycle in ways that were disturbingly similar.

First, President Trump, in an interview with the New York Post about the coronavirus, evoked Reed’s name while complaining about the combative nature of the White House press corps. That is, the female members of the White House press corps, especially two “angry” CBS reporters: Weijia Jiang, whom he recently admonished to “keep your voice down,” and Paula Reid, who recently asked him what he did for the month between when he knew COVID-19 was in the U.S. and when he addressed it. 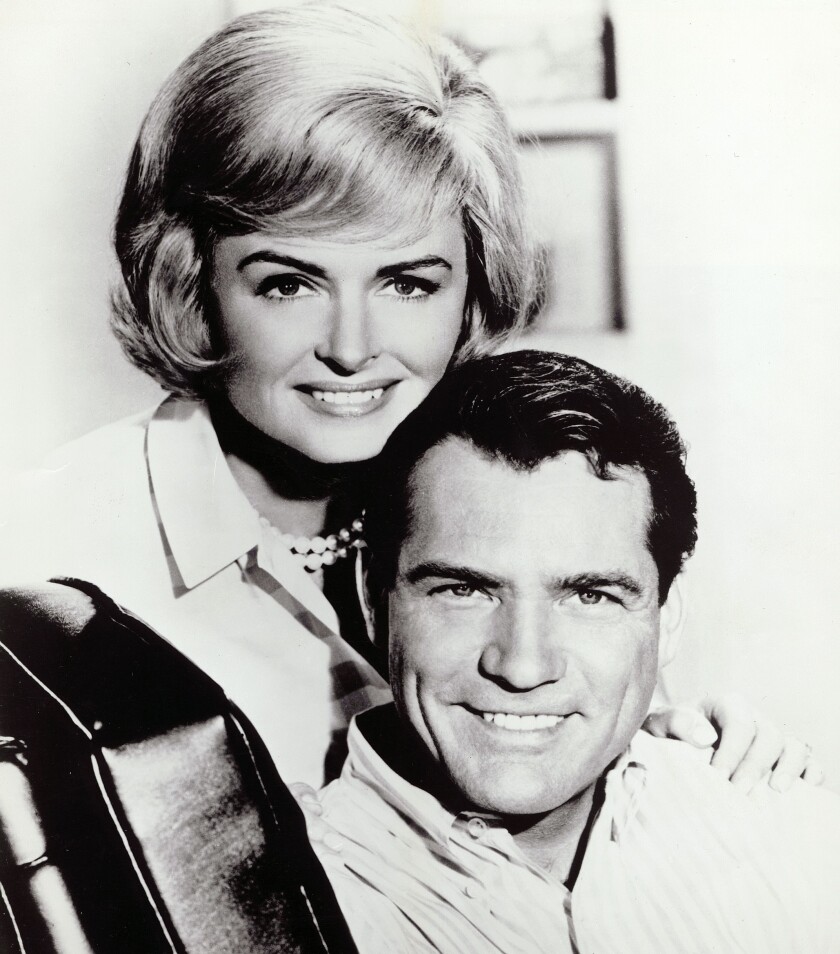 Donna Reed and Carl Betz from “The Donna Reed Show.”

“It wasn’t Donna Reed, I can tell you that,” he said, alluding, in high geezer dudgeon, to Donna Stone, the suburban homemaker Reed played from 1958 to 1966 on “The Donna Reed Show.”

I suppose he could have been referring to Lorene Burke, the gently calculating call girl in “From Here to Eternity,” a role for which Reed won an Oscar, but probably not.

He certainly was not referring to Reed herself. Although her portrayal of Stone, and of Mary Bailey in “It’s a Wonderful Life,” made her an emblem of the devoted wife and mother image so often used to discourage women from pursuing careers by making their lives an either/or proposition, Reed herself never bought any of that crap.

As many rushed to point out, Reed was always outspoken, and often quite angry. About the treatment of women in Hollywood (where she was known as a “troublemaker”), the Vietnam War (she co-chaired Another Mother for Peace and supported presidential candidate Eugene McCarthy) and nuclear power. In 1984, she replaced an ailing Barbara Bel Geddes as Miss Ellie on “Dallas,” and when a recovered Bel Geddes returned to replace her, Reed sued and received a $1 million settlement.

So if Donna Reed were a member of the White House press corps, Trump would no doubt be lashing out at her as well, shocked to discover that the actual woman was nothing like the stereotype she has been used to perpetuate.

Adele, meanwhile, got caught in a spin cycle that was Donna Reed in reverse. The multiple-Grammy winner’s “regular gal” persona, so deliciously at odds with the aching perfection of her voice, is the antithesis of the suburban perfection foisted on Reed. But when Adele’s reality seemed to collide with Adele’s ideal, she too became outrage fodder.

On Wednesday, she posted a photo and message on Instagram thanking those who had wished her a happy birthday. She also thanked coronavirus first responders and other essential workers who “are keeping us safe.”

But no one cared about the message; they were too busy losing it over the photo.

Adele, wearing a simple black dress, has clearly shed some weight. And, well, you know what happens when a famous woman changes her appearance in any way: The world explodes.

First there were the compliments, which included fire emojis and variations of “Wow, you look great.” Then came the criticism of the compliments, which included “Adele has always been beautiful,” “Let’s not applaud weight loss like it’s a big achievement, thereby perpetuating the notion that all women should be thin” and, at times, a very clear subtext of “Et tu, Adele?”

Honest to God, the woman posted a picture on Instagram because it was her birthday and now she is having the “What It Means To Be a Woman” baton forced into her hand by Donna Reed, who has been dead for 34 years and still can’t get out of being trotted forth for the purpose of sexist arguments, should someone feel so inclined.

Though I personally want to thank President Trump for making his reductive remark because, I am ashamed to admit, I did not know much at all about Donna Reed and now I know how cool she was.

What’s not cool is judging women by any socio-political image — historic or contemporary, traditional or reactionary — that is not applied, in the same measure and with the same meaning, to men. Because that is the definition of sexism, whether you’re “expressing concern” for your favorite star’s welfare or the state of the body politic.

While cutting through the strangling net of one ideal — polished perfection — we’ve thrown ourselves into another: standard-busting rebel. But it’s the power of the ideal that’s the problem. It doesn’t matter what the expectations are so much as how much it upsets us when women do not conform to them.

If you demand that someone conform to your idea of nonconformity, you’re kind of missing the point.

President Trump thinks journalists are angry? That’s his right, but he can’t have a different (and in this case absurd) standard for women. You think society and the entertainment industry pressure women to be thin? You bet they do — but that doesn’t mean women can’t also make independent choices about their own bodies for their own reasons. No one should feel pressure to be any size, large or small.

And frankly, I don’t know anyone living who, after putting in the work to lose weight or get toned or wear a nice dress or change their hairstyle or get a new tattoo, doesn’t want a few compliments. I know we’re all feeling the pressure of shutdown, but come on.