Appearing five years since her last album release, she chose the legendary US show because it helped her break America 12 years ago.

The London-based hitmaker showed off her comedy chops during her hosting debutCredit: NBC

Adele, 32, was quick to address the fact she was unrecognisable from the shy, unknown Londoner with a big fringe who appeared in 2008.

Having shed seven stone on a health kick after divorcing last year, she told viewers: “I know I look really different since you last saw me.

“But actually because of all the Covid restrictions and the travel bans, I had to travel light and only bring half of me — and this is the half I chose.”

Her first major TV appearance in four years prompted rumours she was ready to release her fourth album, but she insisted it “isn’t done yet”.

The singer dressed up to appear in a series of comedy sketches last nightCredit: BackGrid

However her singing proved her voice has fully recovered from the vocal cord damage behind the cancellation of her final two homecoming gigs at Wembley Stadium in July 2017.

She belted out four of her classics — including No1 hit Someone Like You, in a sketch poking fun at her single status.

Playing herself in a spoof version of dating show The Bachelor, she name-checked her three albums by announcing: “I’m Adele Atkins. I’m 32. You may know me for being the singer, Adele.

But she was booted out of the competition after rivals grew tired of her constantly singing and interrupting their dates — including when she sang hit Hello while spying in a bush.

Exiting, she ranted: “Thank you everyone, catch me next week on Love Island!”

The Bachelor skit was one of six sketches she performed in the 90-minute show alongside regular SNL comedy performers including Pete Davidson, Maya Rudolf and Kate McKinnon.

She took on the roles of other characters including a gawky granddaughter hoping to entice inheritance from her sick grandmother, a ghost claiming she was murdered by her husband and an ’80s airhead model advertising scented jeans.

Bubbly . . . Adele’s toast of town as she tries to impress

All of her parts involved a series of outrageous outfits, wigs and, in the case of the ghost, buckets of makeup.

She joked about her drinking, claiming she was going to sink “a glass of wine or six” while hosting. And, taking aim at her frequent swearing, she introduced a video montage of her expletive-ridden 2016 Glastonbury headline performance.

Warning how nerves may spark a few naughty words, she added: “I’m nervous, you know what I’m like, but tonight especially so because I swear a lot — like a lot, a lot.

“Because I’m British I tend to skip right over those medium ones straight to the worst ones. I don’t really notice I’m doing it anymore but to keep myself in check tonight I’ve got a swear jar so let’s check in on that to see how I’m doing so far.”

Duly noted . . . she bursts into song yet again in sketchCredit: BackGrid

The singer worked tirelessly all week to prep for the live sketch series Credit: Instagram

Comedian Kenan Thompson was filmed peeking into a giant jar, said to be Adele’s swear box. It was full of dollar notes.

Mum-of-one Adele’s stint as host — following in the footsteps of stars including Tom Hanks, Steve Martin and Justin Timberlake — sparked hysteria online, with many fans praising her acting skills as well as her new look.

Karen Polanco tweeted: “Adele has always been beautiful, but my God she looks amazing!”

Jesabel Raay, wrote: “I seriously can not get over Adele’s body transformation.

“I always thought she was so beautiful but now she looks healthy & confident.”

Yet not all of her work went down a storm.

One of her sketches — a spoof advert for the African Tourism Board — triggered racism claims from some viewers. Adele, Kate and Heidi Gardner played glamorous white divorcees plugging trips to Africa to meet single men, as a number of black men escorting white women were featured in the background.

While Adele’s character praised the culture, landscape and cuisine, Kate and Heidi lauded the well-endowed locals.

Adele admitted her next album is still not complete Credit: Getty Images

Adele says: “I found such a deep, deep connection here,” before Heidi adds: “You can feel it in your stomach” — sparking the singer to break from character due to her inability to contain her laughter.

Viewer Angelica Florio raged: “SNL still produces the most tone deaf, African-fetishizing sketch that Adele couldn’t seem to get through?! Wtf happened there . . . the racist exoticism?”

Adele, who ended the show encouraging US viewers to vote in the presidential election, is expected to bring out her new album next year after Covid put paid to a rumoured September release.

It is thought she will detail her split from charity boss Simon Konecki, dad of her eight-year-old son Angelo.

Due to her love of swearing, Adele admitted she was ‘really nervous’ for the live TV gig Credit: NBC

But sources claim the new music will be uplifting, as she does not want to upset him. They still live near each other in LA, Adele’s home for the past five years.

Since moving to the US she has become close pals with other US-based Brit stars including Robbie Williams, Harry Styles and James Corden, host of another US TV staple, The Late Late Show.

Saturday Night Live is famed for hilarious sketches and spoofs — and Adele got stuck right in.

She looked at home despite being an acting novice. Here are her best moments.

In a bold American accent she declares all you can smell is “cinnamon sugar swirl”.

Rivals get fed-up with Adele singing Hello while spying in a bushCredit: BackGrid

In the Bachelor skit, rivals get fed-up with Adele singing and interrupting their dates — including her crooning Hello while spying in a bush.

Adele plays the ghost of a rich wife, killed by her hubby.

Visitor Chad (comedian Pete Davidson) ends up squashed to death by a suit of armour.

Most read in TV

Seven Corrie spoilers for next week including Debbie’s evil scheme

What happens to Oliver in Coronation Street?

Seven huge Emmerdale spoilers for next week including Charity’s despair

SNL comedian Kenan Thompson stands on a stepladder to peak into the swear jar.

He reports: “Yeah, pretty full Adele. This is just from when you said ‘hi’ backstage.” 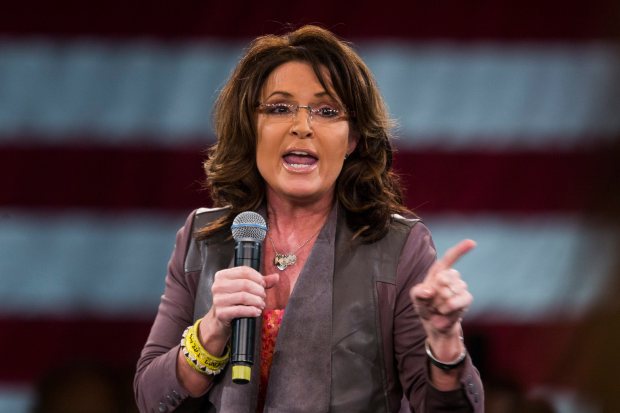 Thanking Palin during her own hosting stint this weekend, Adele said: “I was a guest in 2008.

“Obviously a few people tuned in and the rest is now history.

“Now I don’t know anything about American politics. I don’t want to say anything too political so I’ll just say this, Sarah Palin, babes, thanks for everything.”

She then gave her two thumbs up.