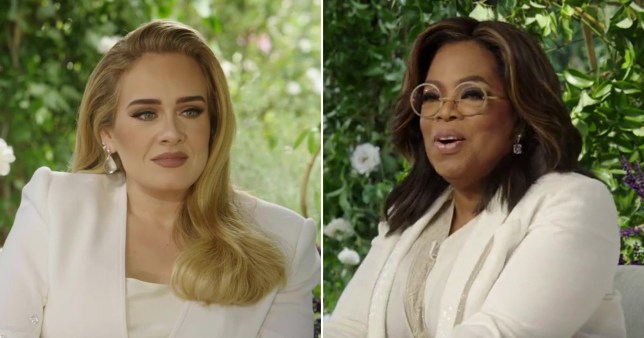 Adele spoke to Oprah about her weight loss (Picture: CBS)

Adele addressed her weight loss in her sit-down interview with Oprah Winfrey, saying that she has been criticised by the public for losing almost seven stone.

The 33-year-old eagerly-awaited US special, One Night Only, aired overnight in the States on CBS, with the superstar performing new songs from upcoming album 30 and some of her greatest hits for a star-studded crowd which included Leonardo DiCaprio, Drake, Ellen DeGeneres, Lizzo and Melissa McCarthy.

She also sat down for a chat with Oprah – in the same rose garden that she interviewed Prince Harry and Meghan Markle – and opened up about her near 100lb (75kg) weight loss and the public’s reaction to it.

Adele picked up a new exercise regime ‘mainly’ as a way of controlling her anxiety after her split from husband Simon Konecki, saying: ‘I had the most terrifying anxiety attacks after I left my marriage.

‘They paralysed me completely, and made me so confused because I wouldn’t be able to have any control over my body.’

She noticed that her gym sessions ‘really contributed towards me getting my mind right’, so began going every day.

Adele added: ‘I had such trust [with her trainer]. And when I worked with him, I had less anxiety. I wasn’t even bothered by my weight but by doing that, it helped me with a lot of things.

“I’d have a set schedule, like a 9am workout and 1pm hike. It gave me good discipline.’

However, the Easy On Me singer admitted that she was criticised by some fans, after Oprah said that she saw that some people felt ‘upset’ and ‘abandoned’ when she lost weight herself.

Adele said: ‘I’m not shocked or even fazed by it because my body has been objectified my entire career. I’m either too big or too small; I’m either hot or I’m not.

‘I was body positive then and I’m body positive now. It’s not my job to validate how people feel about their bodies. I feel bad that it’s made anyone feel horrible about themselves – but that’s not my job. I’m trying to sort my own life out. I can’t add another worry.’

Also on the special, Adele discussed her divorce from Simon, with whom she shares nine-year-old son Angelo, saying that she is ‘embarrassed’ they split so soon after getting married.

The Someone Like You star previously admitted in an interview with Vogue that they didn’t get married until 2018, and they announced their separation in April 2019.

Adele told Oprah: ‘I take marriage very seriously… and it seems like I don’t now. Almost like I disrespected it by getting married and then divorced so quickly. I’m embarrassed because it was so quick.’

Simon was in the audience for Adele’s performance at the Griffith Observatory in Los Angeles.

MORE : The Simpsons writer reveals how beloved cartoon will end – and it’s a cracker