25 Facts to Know About the Mediterranean Diet 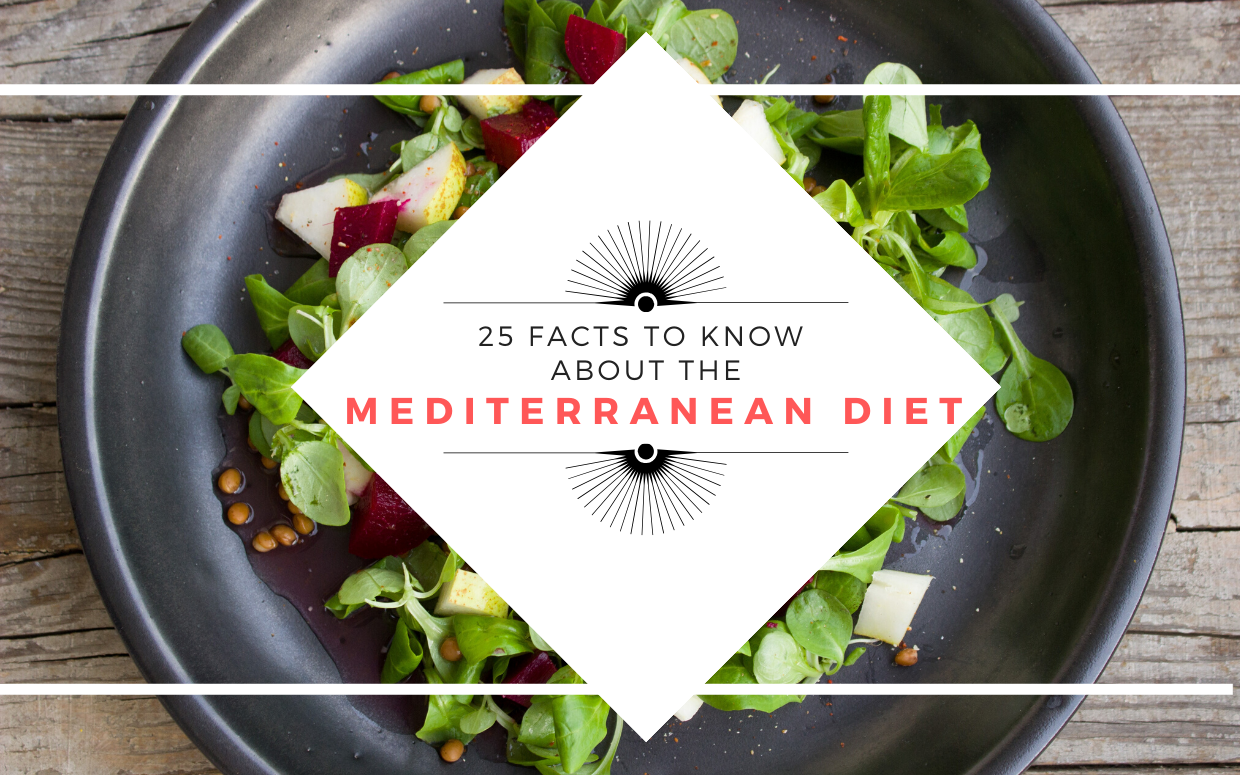 If there’s one diet that’s constantly making headlines, it’s the Mediterranean diet plan. Touted for its array of benefits and delicious recipes that include lots of olive oil, plant-based dishes, and seafood, this dietary lifestyle has been one of the most common eating regimens recent years. And it doesn’t look like it’s going away anytime soon. So what does following the diet involve? What’s on the Mediterranean diet food list? How do you do it? And what do some sample meals look like? Parade.com caught up with Dr. Steven Masley, author of The Mediterranean Method, who gave us his top 25 things to know about this lifestyle. He also was gracious enough to give us a sneak peek at his book by providing us with a few recipes: Arugula Salad with Grilled Shrimp and Fennel and Shellfish Paella with Cauliflower Rice.

“For two years in a row, U.S. News & World Report has ranked it best overall diet on the planet,” says Dr. Masley.

2. The Mediterranean diet has been said to be effective in helping to ward off cardiovascular disease, heart attacks, stroke, and even premature death.

According to Masley, this diet plan incorporates a fusion of what is eaten in Spain, France, Italy, Greece, Turkey, Northern Africa. “So there are lots of delicious options.”

Masley notes that people in the Mediterranean regions consume a lot of vegetables, fruit, beans and nuts as their primary food sources. “There are tons of vegetable plates and bean dishes and salads, and those are really an essential part of it.”

This is the primary fat source of the diet, especially extra virgin olive oil. “It’s delicious. It blocks inflammation and improves your blood sugar,” Masley says.

6. There is a focus on limiting processed foods, chemical additives and sweeteners.

The food options, per Masley, are light on the ingredients and relatively easy to prepare. “You’re using fresh local food ideally and it’s not complicated and the recipes are not overwhelming. Anyone should be able to make these dishes,” he adds.

8. The diet includes moderate amounts of seafood, poultry and dairy.

“Those are the primary protein sources that come with it,” Masley says. He notes that fish and poultry is usually eaten three to five times a week. And eggs can be eaten daily.

9. Mediterraneans don’t have a lot of red meat, but when they do it’s usually pasture-raised and from organically-raised sources.

The right seasoning, per Masley, is truly what makes the Mediterranean meals stand out. “Just take one of the simplest dishes you make, whether it’s chicken or shrimp or a vegetable like green beans. And cook it in extra virgin olive oil at medium heat. Add some Italian or French herbs—or thyme and oregano if you want to keep it simple—a little garlic and a little bit of lemon and that’s it. It’s that combination of spice and oil and flavor!”

The main dessert in the region, per Masley, is fruit. “In Europe, if you order an appetizer and salad and an entrée, you’re going to be given something like grapes or berries or watermelon at the end of the meal,” Masley says. But that doesn’t mean you can’t have the occasional splurge. “Once in a while they’ll use sugar, like in a ricotta blueberry cheesecake for example, or a chocolate mousse. So they do have fancy desserts that they might have once a week, but generally they don’t eat sugar,” he adds.

Masley reminds us that it’s important to make smart seafood choices and avoid fish higher up on the food chain like swordfish, shark, and tuna. “In the Mediterranean they don’t eat a lot of big fish that we think of in restaurants, like Chilean sea bass. They have tuna but they have tuna when it’s in season, which is like two weeks of the entire year. They eat sardines and little white fish and sole and flounder. And they eat lots of shellfish. They’ll also use seaweed in salads and side dishes. So they’re eating way lower on the seafood food chain,” he says.

“If you’re eating lots of farm-raised seafood, especially in Europe, farm-raised fish is where most of those PCBs come from. And arsenic usually you get mostly from the food they feed shellfish, like shrimp in a fish farm,” says Masley. Thus he says to opt for wild whenever you have the choice.

15. Vegetarians and vegans can easily following this eating plan.

Masley says vegans can eat beans and nuts for protein and vegetarians can add plain yogurt or eggs into the mix. He also recommends supplementing with a vitamin B12 and taking algae-based Omegas as well as a probiotic source, such as sauerkraut or yogurt.

16. Skip out on the processed yogurts.

“On the Mediterranean plan, they don’t use sugary, fruit-flavored yogurts the way we do in the U.S. A grocery store in the U.S. might have 20 or 30 feet of fruit and sugar-laden, chemically enhanced food. In Europe, it’s 90% plain yogurt. And that’s a really good source of protein,” Masley says.

17. It’s not an invitation to go crazy on the carbs.

“A lot of people think of Mediterranean as being pasta, pizza, rice dishes—which have a high glycemic load,” says Masley. He adds that in the U.S., we’ve Americanized the Mediterranean eating plan and that Mediterranean cookbooks sold here are loaded with pasta, rice, bread and pizza. “Actual Mediterraneans actually eat very small amounts of these and typically as appetizers,” he says. “We’re ruining the diet if we don’t eat it properly. So you can have pasta but the pasta dishes come under the appetizer group.”

18. In addition to pasta, additional appetizer ideas on the plan include things like: olives, roasted garbanzo beans, and something like a seafood ceviche with avocado and mango and tomato added to it.

“Mediterraneans will typically skip breakfast half the time and just have coffee. “So they incorporate this concept of partial intermittent fasting or limited eating time where they don’t eat from something like 9PM to noon the next day,” Masley says.

20. You can combine the keto diet and the Mediterranean diet.

“Do this by skipping breakfast and going into ketosis in the morning and then just eating a Mediterranean lunch and dinner,” explains Masley.

21. If you do have breakfast on this plan, opt for something like an omelet or frittata or yogurt and berries.

“Americans, when they go to Europe, want a pastry or something like that. But that’s not a normal Mediterranean diet. We don’t eat pastry for breakfast in the Mediterranean. You either skip it or you eat something hardy that’s got some protein to it,” Masley says.

22. Soup and salad are popular at lunch time.

Masley says typical dishes in this department include an assortment of gazpachos, Greek lemon chicken soup, lentil soups and minestrone. Popular salad options are traditional Greek salads, tabbouleh, grain salads or something like a rocket or arugula salad with grilled shrimp.

Masley says duck is also sometimes served, and typically with a side of something sweet like a mashed sweet potato or with a port sauce. “And then they also have lots of vegetarian and bean dishes, whether it’s roasted garbanzo beans or falafel wraps, black eyed peas and pomegranate salad, grilled asparagus with olive oil and lemon,” he adds.

Lentils, garbanzo and fava beans are the top three beans on the menu. But Masley encourages all varieties, noting that if you look at the Blue Zones, they all tend to incorporate legumes into their diets. “They are incredible source of fiber and are also they’re also some of the highest antioxidant food on the planet,” he says, calling beans “one of the most important parts of the whole diet.”

Mediterraneans, says Masley, have one or two glasses a day, and mostly red wine with dinner. And what they drink most often is a lot of is water. “When you sit at a table at a Mediterranean country, they pretty much walk up and open a bottle of water for you, whether asked or not,” he says, adding that when people hear that red wine is good for you, they often buzz past the recommended serving suggestions, which can do more harm than good. “If you have one maximum two servings of red wine a day with dinner, it improves your blood sugar and lowers oxidation and helps decrease your risk for heart disease; even some kinds of cancers are decreased with small amounts of red wine everyday. But don’t overdo it,” he says. And no, beer and hard liquor will not give you the same effects.

Read all about the Optavia diet.